Florida Studio Theatre Is the Place to Go This Season 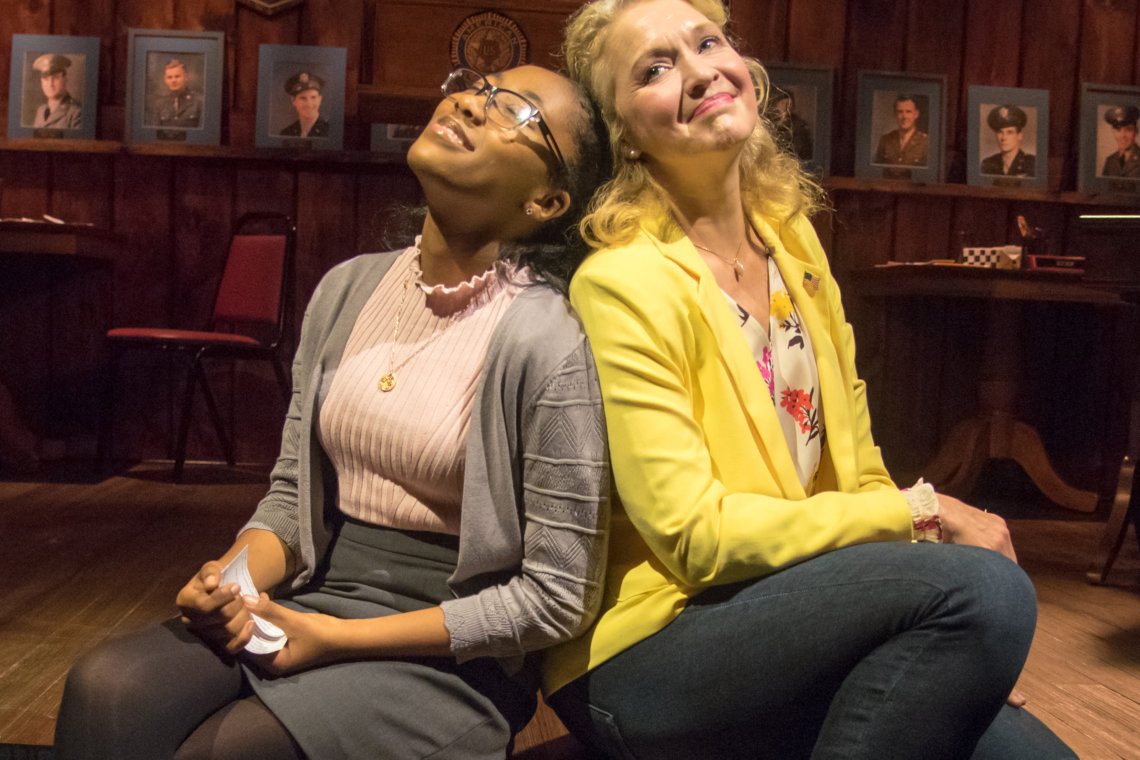 The hot, new, humorous and thought-provacative play can be found at Florida Studio Theatre in the heart of downtown Sarasota.

The setting for the play “What the Constitution Means to Me” is a wood-paneled room covered with shelves of photos of American Legion members with a backdrop of the U.S. flag.

Here you are introduced to a (now) grown woman named Heidi Schreck reflecting on the 15-year version of herself as a high school debate student who participates in a contest where she and other participants  must deliver impassioned speeches and interpretations about the American Constitution through a personal connection.

The young Schreck – who us obsessed with the Salem Witch Trials and Patrick Swayze – states right up front that “The Constitution is a crucible or witches’ cauldron.” She goes on to explain “A crucible is also a severe test … of patience or belief … and the Constitution can be thought of as a boiling pot in which we are thrown together in sizzling and steamy conflict to find out what it is we truly believe.”

Heidi’s performance is delivered in a series of heart-wrenching stories of abuse suffered by three generations of her female ancestors, in addition to the tragic account of a woman whose abusive husband kidnapped and killed her three children after the law failed to protect them. Hearing these poignant accounts, one doesn’t have to be a constitutional scholar to understand the “equal protection” promised in the 14th Amendment is not always equally applied, especially for women and people of color.

Equally compelling are recordings of actual Supreme Court hearings, where the male justices struggle to discuss female birth control and debate whether the word “shall” means the police “must” protect a woman from a violent spouse. (They decided it did not.)

Heidi’s character is portrayed by a highly passionate, spirited, intelligent and quite humorous, Amy Bodner, Throughout the one and a half hour play, she weaves ongoing humor  with her overall conceptual thoughts on the Constitution, and shares deeply personal anecdotes reminding the audience that when the Supreme Court of the United States debates laws, they were (and are) debating real people’s lives and livelihoods.

This conflict is at the very heart of the play and Heidi, passionately upholds the Constitution’s significance while valiantly pointing out its many shortcomings. The goal is to rally the audience and inspire them to bring the historical document into modern times by reimagining its future and protecting the next generations.

“What the Constitution Means to Me” ultimately forces us to takes a fresh look at America’s most significant, founding document: exploring what The Constitution says ver batim, who the document really serves, and what groups – especially women – it fails to support. The play brings to mind a famous quote by Abigail Adams who advised her husband John Adams to “remember the ladies.” As it was written,  the founders left any mention of women out of the founding documents and did not  guarantee women equality. Ultimately, the US Constitution does not guarantee women the same rights and protections as men, and to the surprise of many, it contains no explicit protection against discrimination on the basis of sex.

Perhaps one of the most special highlights of seeing this play is the appearance of a 16-year old actor named Deysha Nelson, who appears in the third act as a high school debater alongside Heidi. Deysha is a show-stopper and inevitably will be a prominent Broadway figure one day. Among many other performances in movies and on stage, she worked with Nickelodeon and Netflix, and a CBS TV show. Highly talented is an understatement when it comes to experiencing Deysha Nelson.

Let’s also give a round of applause to Kevin Loreque who plays Legionnaire Mike – the monitor of the debate process. Another talented actor, I remember seeing him in “Boardwalk Empire,” and “How The Grinch Stole Christmas,” and a host of many other impressive national (and international) appearances.

What The Constitution Means to Me runs through February 26 and of all the events I have attended in Sarasota this season, this play ranks #1 to date.  I urge you to attend, especially women!

What the Constitution Means to Me Facts:

The play became a success Off-Broadway during the 2018-2019 season, and transferred to Broadway, where it opened at the Helen Hayes Theater in March 2019. The initial 12-week engagement of the Broadway production was extended twice and became a smash hit at the box office.

(FST) is an ideal venue for this play for its intimate auditorium and stellar sound system. FST is Sarasota’s contemporary theatre founded in 1973, and has expanded to five theatres located in the heart of Downtown, Sarasota. Each theatre is small in size and large in impact — providing intimate and engaging settings for high-quality, professional performances. Today, FST has established itself as a major force in American Theatre. FST is the largest subscription theatre in the state of Florida and among the largest in the country, serving more than 230,000 live attendees each year across its diverse programs: Mainstage, Cabaret, Stage III, Children’s Theatre, FST School, New Play Development, and FST Improv.

Single tickets range from $25-39 and are on sale at FloridaStudioTheatre.org 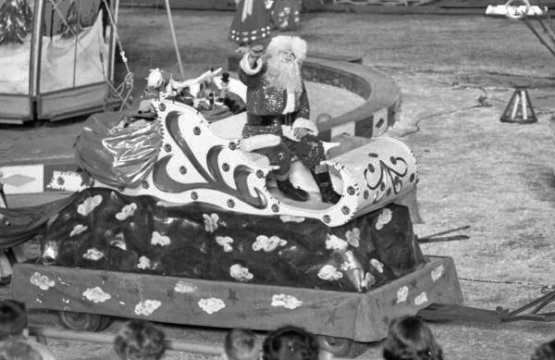 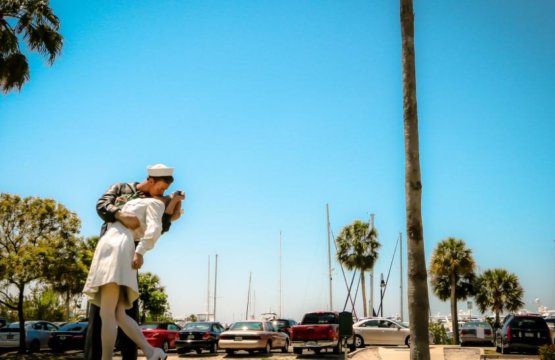 Andrea Martone is a former Arts & Entertainment Editor for the Sarasota Observer Newspaper Group, as well as a former Editor-in-Chief of a Long Island (New York) newspaper chain. She moved to Sarasota 14 years ago after working as an executive in NYC in public relations and marketing. She currently is a Public relations & marketing consultant and President of Insightful PR. She lives and breathes all things art, culture, music food and wine and is proud to be the Executive Editor of Sarasota Events Calendar. 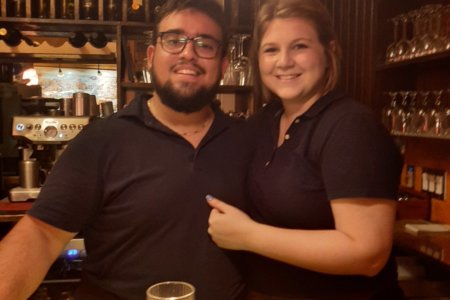 All roads lead to Corato. D’Corato, that is. An Italian/Mediterranean family owned and operated restaurant nestled off S. Washington Blvd. near downtown… 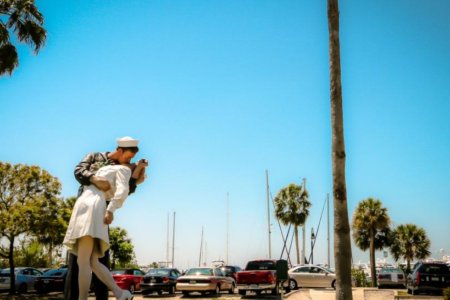 Sarasota Events Calendar has our heart in Sarasota, and what better time of year is there but Valentine’s Day to give readers… 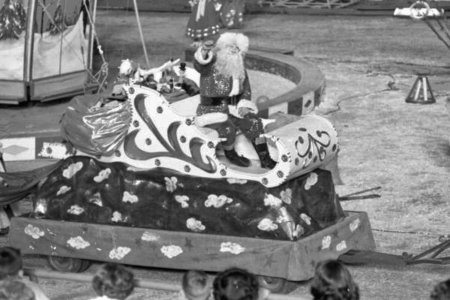 Balmy December days in Sarasota may not trigger childhood holiday memories for all of us, but rest assure Sarasotans have a long…

2 days ago by Andrea Martone

5 days ago by Andrea Martone

Love is always in the air... Read More

Florida Studio Theatre Is the Place to Go This Season

2 weeks ago by Andrea Martone

"What the Constitution Means to Me"... Read More

1 month ago by Andrea Martone

2 months ago by Andrea Martone

Please enter your username or email address. You will receive a link to create a new password via email.